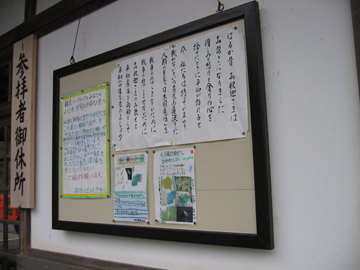 A long time ago, Buddha taught us that when we get rid of hatred, anger and greed, there is peace.

Now we have a “Japanese constitution” humanity treasures that state of the courageous choice of not fighting. 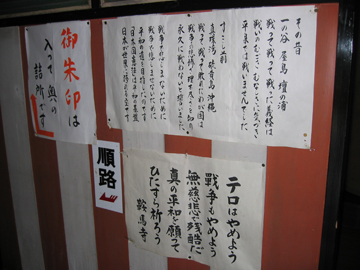 Translation of the top poem in the above image:

Once upon a time, Yoshitsune (a samurai warrior) realized the cruelty and emptiness of war after fighting, fighting, and fighting at Ichinotani, Okushima, and Dannoura. He no longer continued on his fight at Hiraizumi.

A little while ago, our country found out about the tragedy and ridiculousness of war after the fighting, fighting, and losing at Pearl Harbor, Iwajima, and Okinawa. We have made a commitment not to have war forever.

Stop the terrorism
Stop the war
It is heartless & brutal
Let’s just keep praying for the wish of true peace.

These three poems were posted at the Kurama temple. The top one was posted right outside of the rest area and the other two were at the entrance of the main temple. They are written in calligraphy by hand on regular paper (not laminated), so I assume they make new poems to post at frequent intervals. I wish I found out who wrote these poems, but I assume one of the head monks at Mt. Kurama did.

These three poems touched my heart when I was there, but I purposely skipped them when I wrote about the rest area for the fear of discussing politics in this blog. However, I heard that a few days ago Japan decided to recall troops that were sent over seas and I was compelled to share these three poems with all of you. What do you think?

For those of you who don’t know, after WWII the “Japanese constitution” was created stating that Japan was only allowed to have military troops for defense only. After 911 Japan was pressured to make a six year agreement to support the war in Afghanistan. Many people, including myself, felt this was against the “Japanese constitution”. Now that the six years has ended I was happy to hear that the Japanese government decided not to renew the agreement of supporting the war.

A final note of clarification, the poems didn’t talk about any specific war or any point of view about the politics, only about war in general. And because I related to the poems based on current events, I wrote the last paragraph from my own personal perspective and not to be confused with the perspective of Kurama Temple.

Reiki is a natural healing technique in which the practitioner directs this Universal Life energy to the client using a non-invasive, stress-reducing technique.

The gentle laying of hands is practiced, either directly on a patient’s fully-clothed body or resting a few inches above the body.

Michelle is a Reiki Master and Teacher, a certified aromatherapist and spiritual counselor.

She is the founder and owner of Purple Fish Healing where she holds her private practice. In her private sessions, she includes spiritual counseling, aromatherapy, crystal healing and other healing techniques that best fits her clients’ needs.

She has studied extensively with many Eastern and Western Reiki instructors in the US and Japan and can bring in a unique combination of various techniques and philosophies.